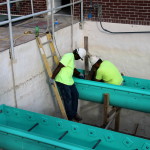 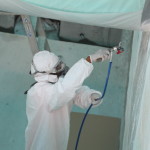 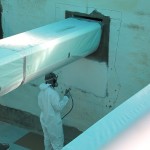 Type of Structure(s): The structure was concrete filter basin #10 at the 52 year old Stoney Filter Plant, which was being upgraded. During the upgrade, the contractor was removing portions of the concrete walls for new troughs. These walls had been previously coated with AquataPoxy© A6 thick in 2000.

The coating was in great condition 15 years later. Only two areas showed damage. The first was outside the construction area from the replacement of new troughs. These areas included a quarter-sized area that appeared to have been caused by impact damage. The second was a 3’ X 5’ area approximately 20-30mils thick. This area appeared to have been top coated outside of the recoat window. It appeared used as a cosmetic repair, covering an area that had holiday repairs.

Testing was performed by gluing seven 20mm dollies to the coating surface with a fast setting, high strength epoxy. After allowing the glue to set for 24 hours, the dollies were then cored using a 20mm coring hole bit. The adhesion test was performed using a Defelsko  Positest AT. All tests were performed in Filter Basin #10.