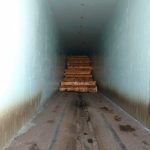 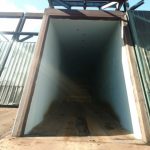 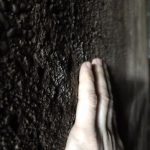 Freres Lumber Company, a plywood manufacturer located in southern Oregon, utilizes concrete steam vats to condition (wood) blocks submerged in water at or about 150F degrees prior to pealing of the veneer for production. Some of the vats are 35+ Years old and feature concrete substrate walls and ceilings.

The issue which arouse as result of production, service maintenance and the occurrence of a thermal shock environment from the steam and delta temperatures along with vehicular production traffic i.e.; forklifts and other equipment created surface profile damage to the substrate. This lead to deterioration of the concrete vat tunnel walls and ceiling. Aggregate dis-bonded from the substrate, which would fall into the production loads and became lodged within the blocks (wood). The veneer knives which sheer the blocks would then become degraded during service process in coming into direct contact with the dis-lodged aggregate. This phenomenon created downtime and production loss in the re-tooling, re-sharpening and service time process through performing maintenance repair on the production knives. The approximate down time for production loss correlated to approximately $200 per minute of process deficiency in production to perform service maintenance on the veneer knives.

Freres was then approached by Molecular Inc. in reference to having a Raven 404 linings system installed at 80 mils DFT. Since initial installation within the tunnel vat processes of the Raven 404 system (May 2014), which provides a high build, monolithic, protective barrier to the vat substrate and also features thermal shock resistance, a dramatic decrease in degradation to the veneer knives has occurred. This in turn has decreased downtime and accelerated production efficiency which yielded an ROI equivalency to 6 months from time of installation in retrieval of the costs of the Raven 404 installed lining system. Since the time of the first Raven 404 installed tunnel vat, Freres has had an additional (4) tunnels installed to which the same ROI numbers have been reflected. To this day, minimal damage from production and environmental service conditions creates the aggregate phenomenon and high yield in production is a constant.