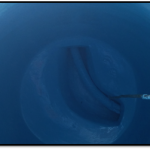 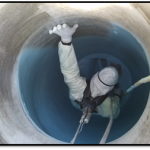 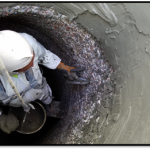 Hunter Contracting CO. was selected to evaluate over 240 wastewater structures and manholes for the Ak-Chin Indian Community in Maricopa, Arizona. It was found and recommended that over 106 manholes needed rehabilitation with a composite coating system. Hunter recommended using one of four epoxy coating systems and one polyurethane coating system. Several factors were used to evaluate the coating systems, not just the lowest bid pricing, such as, the coating systems physical properties, chemical resistance and historic performance, the systems capabilities, reputation and performance history using the products submitted by companies. In August 2016, Raven Lining Systems and certified applicator Southwest Environmental Testing from Phoenix, AZ were awarded the contract and began the project using Raven 405 100% solids Epoxy coating system.

After high-pressure water blasting to remove deteriorated cement and surface contaminates, the condition of structures was so poor that it exceeded a CSP10 surface profile. More than two inches of cement substrate had been lost and ¾ inch aggregate exposed. The corrosion was due to deterioration from exposure to H2S gas and the sulfuric acid, which was produced by bacteria consuming the H2S gas and converting it to H2SO4. A thick rapid-setting, high-early-strength cement resurfacing was applied to reinforce and return the structures to their original dimensions along with providing a smooth uniform surface to apply the protective coating system. The resurfacing is given at least 24 hours to cure before water blasting a second time to a CSP3 minimum.

After the second surface preparation was dried, a 10mil coat of Raven 155 primer was applied to reduce the amount of air and moisture movement from the substrate. This helps reduce the number of holidays or pinholes in the final top coat of Raven 405. After allowing the primer to cure to a tack free state, the top coat is spray applied. The Raven 405 epoxy coating is applied to the structure using a plural component spray rigs and airless spray gun to a minimum thickness of 125mils. The coating is allowed to cure at least 24 hours and then Holiday tested to find any flaws or pinholes in the coatings film. A pull test is completed to check coating adhesion to the structure. Any flaws found and the points of adhesion testing are repaired with a hand application of the Raven 405