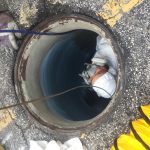 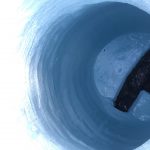 The project began on March 27th and was completed on April 12th. First the 39 manholes were cleaned and profiled per ASTM D4258/D4259. All leaks were then stopped with chemical grout and the surface was rebuilt with Raven 755 cement. Once the cement had cured, the surface was again cleaned and profiled per ASTM D4258/4259 to an ICRI profile of 3-6. Raven 405 was then applied at a thickness of 125 mils minimum by a heated plural component spray rig designed specifically to apply Raven 405 and other Raven 400 series epoxies. The manholes were moderately corroded with heavy I&I. Their proximity to the coast made long term protection from I&I the top priority. This project was in heavy traffic and heavily populated areas, where safety and traffic control were critical. Careful attention also had to be made to the interface between the Insituform pipe rehabilitation and the Raven 405 lining. The pipe rehabilitation portion was completed ahead of the TV Diversified spray crew and the Raven spray crew prepared the pipe termination to accept the Raven 405 lining. Raven Lining Systems has a long-term relationship within Miami-Dade County since its first project completed in 1996 is still in service and performing perfectly today. Raven 405 is being used on the 2017 manhole rehabilitation project and has recently been added to their Wastewater Treatment Plant specification.