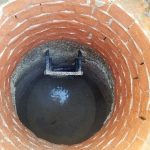 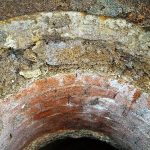 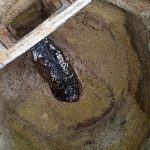 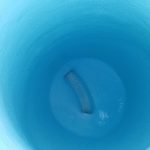 This manhole was located right in the middle of a hotel entry way and just two feet off the street. The City of Yuma chose to rehabilitate the manhole using Raven 405FS 100% solids Epoxy coating over replacement due to the drastically high price of by-passing the sewer around the manhole, manhole replacement, road and parking lot replacement cost, traffic control, and the loss of business to the Hotel.

Even the brick once high-pressure water blasted and cleaned lost about 1/4 of an inch of their surface. Boards with small holes in them were placed at the bottom of the manhole to reduce the amount of large debris that entered to sewer system but let the water drain through. Four 40-gallon trash cans of debris were removed from this hole.

A rapid setting high early strength cement was applied at 1.5 to 2 inches thick to repair the manhole interior surfaces. Then the hole was high-pressure water blasted a second time once the resurface had cured for 24 hours to remove weak latents and to provide a clean CSP 4 profile minimum. A flow through system was used during the rehab process so flow did not have to be bypassed and to keep a large amount of debris from entering the system.

Raven 405FS was applied at over 220 mils thick in a single application and then once the coating was cured the flow through system was removed. A holiday test was performed in which four pinholes were located and repaired at once.

The entire rehabilitation process from start to finish only took three eight-hour work days without causing any major inconvenience or disturbances to the surrounding community. Since this project was completed the City of Yuma has contracted Southwest Environmental Inc. to rehabilitate a dozen more manholes.