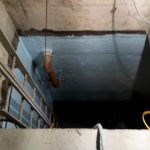 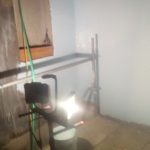 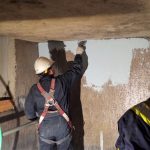 After 25 years of service, the existing fiber reinforced coating on the wet well walls was deteriorating and in some cases the fibers were completely coming loose and getting into the systems and damaging the pumps. The concrete was being attacked and weeping in some locations, however, the overall condition was good.

The application was done in two phases as both wells could not be taken out of service at the same time. The first was completed at the beginning of May 2017 and took ten days. The existing fiber reinforced coating had to be removed using special blasting techniques as this type of coating is not easily removed. The weeping pinholes were repaired and the concrete smoothed out using a Raven approved concrete repair system. The substrate temperature was at the absolute lowest acceptable to Raven for application of the primer – Raven 175. This was applied on a Friday, and allowed to cure over the weekend. Due to limited availability of approved spray equipment, the contractor decided to use Raven 405T (trowel). Raven supported the application by being on site the entire project. The application ability of The Willby team was excellent! The first wet well was completed in two days. The wet well was returned to service after 5 days and work began on the second wet well at the end of May and followed the same procedure.

Condition of Structure in Recent Inspection and If Applicable, List Any Test Performed During Inspection:

Raven was on site for the entire application of the first wet well, and throughout much of the second. The primer and coating were both applied per Raven’s specifications and over 100 mil gauge tests were conducted and all were applied with the target range of 100-110 mils (coating) and 10 mils (primer). This is excellent considering the entire job was hand applied.

An inspection of the completed coating project revealed only three pinholes – which were filled.

A third-party inspector was hired to complete pull off adhesion tests. Four random pulls were completed with all achieving a 100% substrate failure – which is considered ideal!

Unique Conditions or Experiences during Project:

The municipality is in northern Ontario, where many engineers debate the need for a coating. In this case, the wet wells had been coated at the time of construction, however, no records could be found to justify why.  It was decided to coat it as a precaution. Raven was contacted based on its experience and expertise.

As the station was under a complete retrofit, the work needed to be scheduled and conducted under a strict timeline.

The temperature of the surface and the ambient temperature due to the average weather conditions at that time of year in Ontario created a challenge pushing Raven’s lower limit for application. (Note: all product cured per Raven’s expectations and all third-party tests passed).

The contractor did not have immediate access to the proper spray equipment for using Raven 405 – so the trowel version was used. This decision turned out to be a great success due to the exceptional application ability of the Willby team.

The engineering company (CC Tatham) and managers from the Municipality of Muskoka have expressed their satisfaction with Raven’s service, product and completed application and have since invited Raven to advise and quote on other projects in the region.