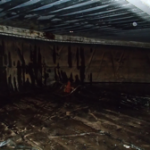 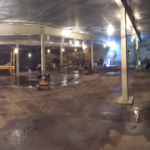 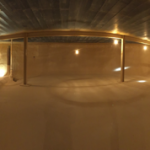 At roughly 9250 feet above sea level, two 260,000-gallon potable water tanks lay in the picturesque town of Telluride. The tanks were built between 1920 and 1930; and it was thought that the tanks were made of concrete, but after the west tank rehabilitation project began, it was found that at least the upper 4 feet of the tank was constructed with stacked stone. At some point in the west tank’s life it had been coated with gunite products to the average thickness of 3 inches. This was most likely done to provide structural stability and water tightness. Unfortunately, the west tank continued to leak excessively, and in the 1970’s a Hypalon liner was installed. The Hypalon liner worked well for forty years with only small repairs needed, but the cost of such repairs grew to the point that it was no longer cost effective to maintain the liner. Also, it was found that greater than 2.1 million gallons of water were still lost annually. A tank replacement cost estimate was completed and determined that it would be more than 4 million dollars to build new tanks at the same location. This was not only due to the cost of the tanks, but also because the road leading up to them would have to be repaved to make it usable by heavy equipment. The town would also be without half of its water supply during demolition and reconstruction. It was decided in 2015, after an inspection of the tank, that the old liner needed to be removed, the tank repaired, and a new coating system installed.

In October 2016, a contract was issued to John LaDuke and Global Linings of Gunnison, CO to rehabilitate the
western tank using products manufactured by Raven Lining Systems. Once the old liner had been removed, large portions of the gunite fell off the walls and hollow stops were found. All the loose gunite was removed, exposing the stacked stone beneath, and most of the mortar between the stones was lost. A thorough cleaning was completed with water and then cement repairs of the structure commenced. Large holes at the end of the roof support beams had to be filled along two old pipe inlets and outlets along with all other surface defects using a polymer modified cement (Raven 760 HPPC).

Once all the damaged areas had been repaired, the tank was cleaned for the application of Raven 155 water-born penetrating primer in two coats to seal and strengthen the repairs and the structure’s surface. After the Raven 155 cured, a coat of Raven 175 100% solids epoxy primer was applied within the recoat window. This was completed to further seal the structure and provide enhanced adhesion of the Raven 511 to the substrate. The Raven 511 and Raven 506’s rapid cure rate required them to be spray applied using plural component equipment and air purge impingement spray guns. The coat of Raven 511 on the walls provide an adhered water tight liner and acts as an adhesive for geotextile fabric that was inlayed into the 511 while it was still in the wet/tacky state within the curing process.

The outside of the tank roof was cleaned and prepared then coated with Raven 511 to seal it from leaking dirty water and debris into the tank, as well as acting as a barrier coating for corrosion prevention. With the walls lined with 511 and fabric inlayed, the entire interior of the tank was coated with greater than 125mil of Raven’s NSF61 potable water approved AquataFlex 506. The 506 applications are a semi-adhered watertight flexible liner. The 506 was also applied over the roof’s support beams and legs to provide a further barrier coat and protection from corrosion. Drew Lloyd, Telluride Engineer, stated once the project was complete that the town was very happy with the application of Raven products and workmanship under very difficult access conditions by Global Linings along with the performance of the lining system to date.