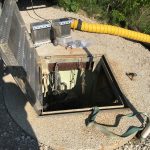 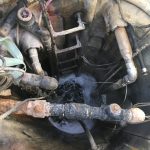 The original Raven system application occurred in June 2007. In August 2018, Plummer’s Environmental Services was asked to inspect the application by the owner, Granger Landfill. Since the original application, the landfill has gone through transitions where it is no longer accepting new material; however, the lift station has continued and will continue to be in use as the landfill generates methane. The original application of the precast concrete lift station totaled 500 square feet, consisting of Raven 155 primer and Raven 405 epoxy.  The primer was applied after surface preparation followed by the spray application of Raven 405 at 125 mils.

The pairing of Raven 155 and Raven 405 was selected due to its superior chemical resistance and the rapid return to service. A critical issue on the project was by-passing the lift station. This is a costly but necessary step. The selection of Raven 405 helped minimize the time required for by-pass pumping, thus helping keep costs down. Additional safety measures were in place due to the nature of the hazardous confined space.

The Raven 405 is still in excellent shape. Because the Raven 405 is an aliphatic amine cured epoxy, it does change color. This was the only change noticed under the inspection, but this does not affect the chemical resistance or performance of the epoxy. The coating is in great shape for its 10-year inspection.

Plummer’s Environmental Services has been in business performing municipal and industrial services for 25 years. They have been a Raven Lining Systems Certified Applicator for 15 years. Among their services are municipal cleaning and water jetting, sewer rehabilitation, TV camera of sewers, hazardous and non-hazardous waste disposal.