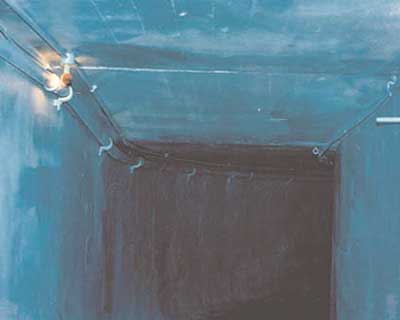 Condition of Structure(s):
There was corrosion due to saltwater infiltration.

Description of Application:
Consolidated Edison’s Hudson Avenue Tunnel Breezeway in Lower Manhattan, New York was in desperate need of rehabilitation due to infiltrating sea water at high tide that filled the tunnel to over 3’ in depth. The challenge was to identify a rehabilitation method that would restore structural integrity and prevent future corrosion inside the interior of the structure by eliminating seawater infiltration.

At high tide, cracks in the steel-reinforced concrete absorbed the seawater and exposed the concrete and steel to chloride and sulfate ions, and oxygen from inside the tunnel. As the concrete dried, the salts would crystallize which helped induced spalling of the concrete. Corrosion cells also developed allowing the formation of rust scale at the reinforcing steel. Continued cycling caused severe disintegration to occur on the inside wall of the tunnel, particularly along construction joints where infiltration was active. In these areas, rusting steel expanded and ruptured the concrete surface.

These actions, coupled with freeze-thaw conditions, caused the severe deterioration of the tunnel’s interior walls. ConEd considered numerous rehabilitation methods; however, the only method which could provide a 100% solution was a composite system utilizing a high strength mortar, and hydraulic cements to fill large voids, stop leaks and restore sound surfaces which would be topcoated with 125 mils of Raven 405 Ultra High Build Epoxy.

The project was successfully completed with the composite system in 1994 and Consolidation Edison Company of New York approved this procedure for future tunnel restoration work.